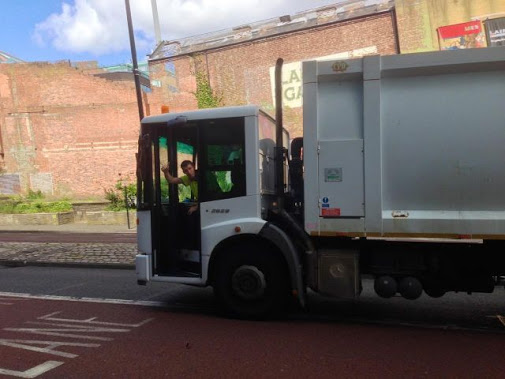 Cyclists and pedestrians die under the wheels of heavy goods vehicles in London but this, it seems, is often deemed to be a price worth paying for the supposed economic benefits of having a bustling, thriving city. Much the same can be said about other UK cities, and cities around the world, too. Cyclists and pedestrians don’t seem to matter. So, let’s talk congestion. A ban on truck movements during rush hours can lead to clear and obvious benefits for car drivers. (Yes, valuing the time savings of motorists rather than lives lost is callous but this how much transport planning works.)

Earlier today I wrote a piece on motoring.co.uk arguing that car drivers should support the growing number of calls for HGVs to be made safer and to be prevented from using roads at peak hours. And here’s why: reduced congestion. During the 1984 Los Angeles Olympics one of the key ways of freeing up roadspace was to restrict the movement of trucks – and it worked, there was no gridlock. If they want to sit in shorter traffic jams car drivers should join the campaign to get trucks off the road at peak times.

In 1987, the Los Angeles Times reported that the city would revisit the Olympic truck ban. In the end it didn’t – mainly because of a law requiring traffic planners to provide a comparable alternate route for any section of federally funded road that was made off limits to trucks – but it’s instructive to read the reporting from the time.

“Banning trucks from crowded Los Angeles freeways during rush hours may be an idea whose time has arrived,” reported the newspaper.

“Transportation planners say such restrictions could sharply reduce congestion on many freeways and streets. [The proposals] have as their antecedent the successful voluntary truck ban that is widely credited with helping create free-flowing traffic during the 1984 Olympics.

The traffic reduction measures brought in for the duration of the Olympics – including the truck ban during rush hours – led to a 60 percent reduction in congestion.