“Cyclists cause air pollution” is becoming one of the regular tropes to attack cycling, wheeled out by shock-jocks, NIMBYs and even black-cab drivers (possibly tweeting such views from their diesel-powered vehicles, idling at taxi stands).

It’s insidious. Have a look at this A-level physics exam paper from Edexcel: 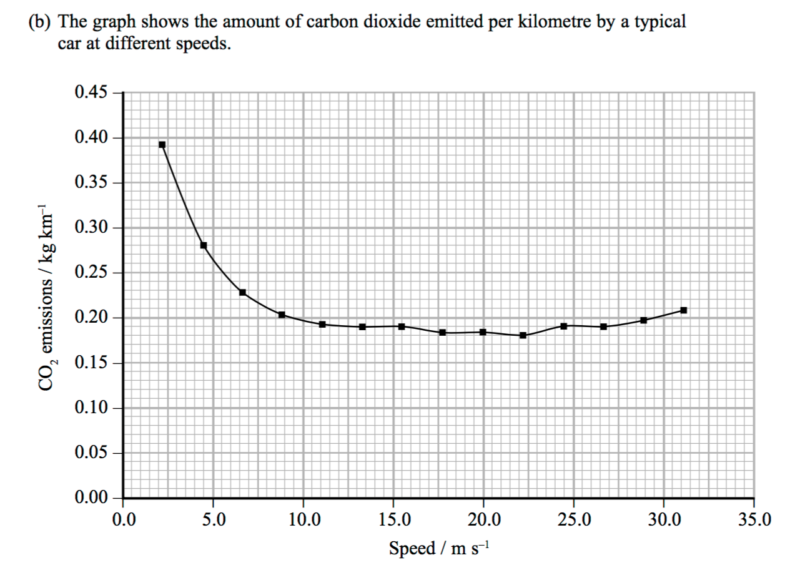 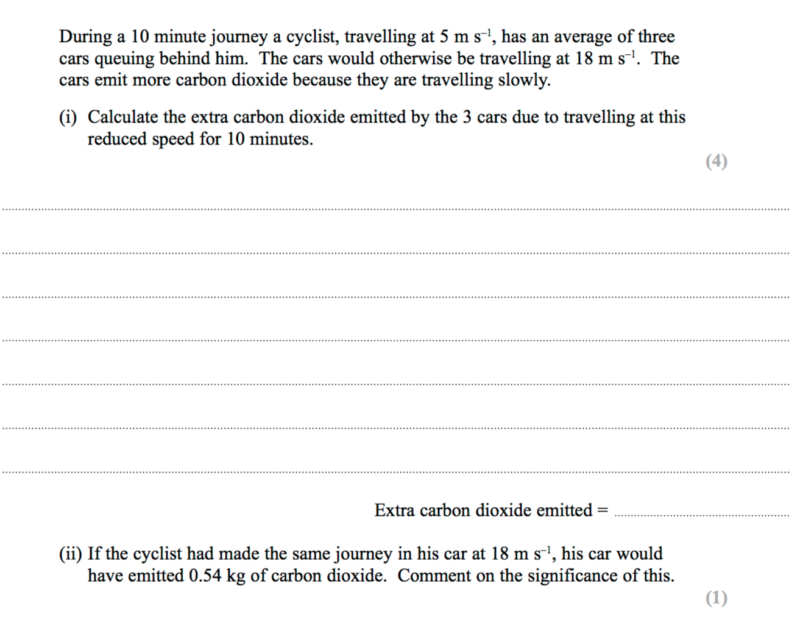 I was alerted to the questions by my 17-year-old daughter. The exam paper is real.

More such bikelash nonsense will be in Bike Boom, published in May 2017. Sign up for updates on the right.

Actor Tom Conti isn’t a happy bunny. He’s also about as knowledgeable as a cute and furry woodland creature on who and what actually pays for roads but let’s hop over that and take a look at his other claims. He believes – like many others on this new petition to stop a Super Cyclehighway in London – that cycleways cause pollution. Getting people on bikes and out of cars will somehow lead to more noxious fumes? OK, he and they mean because of idling engines but that rather ignores the fact that London, like many cities, has long had roads filled with motor vehicles going nowhere fast.

This plan is imbecilic! It will cause frustration and a massive increase in pollution. Cyclists will not stay in the lanes; they never do. They also all travel at different speeds so trying to contain them in lanes will cause huge danger to them … This is a plan to be paid for with money largely from drivers of motor vehicles for the use of those who contribute nothing. The increase of cyclists, because they slow down traffic, causes greater pollution and danger to their own lives … Has the financial loss in parking and congestion charges been calculated, not to mention Londoners abandoning cars altogether thus depriving the chancellor of road tax, insurance tax and huge fuel taxes?
Tom Conti

The petition throws up (in perhaps more ways than one) a whole load of other common “bikelash” themes, although the comment from Roberta Perlman is a new one on me – she said it’s best not to have cycling infrastructure because cycleways upset motorists: “Happy motorists mean safer cycling”, she claimed.

But what’s especially interesting about this particular and perhaps peculiar petition is the fact people seem to be using their real names. These aren’t anonymous rants by online trolls – even the high and mighty are putting their names to the thing. Sir Maurice and Lady Irene Hatter certainly love their exclamation marks.

It is just too ridiculous for words!!!! And nobody thought this through!!!!!!
Sir Maurice & Lady Irene Hatter, London

“I am fed up with these nonsensical proposals; where does Andrew Gilligan live? Why don’t these interfering people leave well alone and consider the needs of the elderly, the infirm and, in general, the population who are not interested in being part of some bicycle ‘utopia’.”
Maxine Libson, London

“This entire scheme is a disgrace environmentely and will be a terrible hazard, health wise, to both young and old. – gas fumes, gas fumes and more gas fumes. I would also like to remind Boris Johnson that we live in London and not Amsterdam and that we have roads, broken down ones but still roads and not canals.”
Wendy Lipton, London.

“This scheme will force motorists onto alternative routes creating snarl-ups in areas poorly equipped to deal with them. Cyclists need to SHARE the road not steal it from motorists.”
Cynthia Kapelus, London

I am livid that these plans do not take into consideration the realities for local people who cannot use cycle routes and rely on automobile transport.
Debra Blair, London

“The plans are total nonsense … The area concerned is a community – this will break it up. Air pollution will worsen as cars ait in tradfic queues and this will badly affect walkers, cyclists and particularly babies in children in buggies, where they sit or lie low down, close to the vehicles as they sit in long queues.”
Vivien Lewis, London

Whoever is authorising and rubber stamping these schemes sure,y has no idea, or has their head in the clouds, to the total carnage they are causing to our roads.
Brad Taylor, South Ockendon

“The air on Prince Albert road is already polluted above legal limit and we cannot open our windows. This scheme would grid-lock the traffic and create a toxic environment.”
Giulia Filippelli, London

My children live in north London – my husband has a disabled badge and I feel that far too much of London is being given over to cyclists. The idea that an ageing population is going to take to their Bikes is ludicrous. Many cycle lanes are quite sparsely used. There are other groups of people who’s needs are being bulldozed by these crazy schemes. The face of London has been much changed in the last 10 years by cycle lanes. The traffic is Far, Far Worse.
Lorraine Esdaile

“This is a punishment for children and old people who live in the area and brithe this very polluted air.”
Victor Loewy, London

London is an amazing city – why try to ruin it with thoughtless, wasteful, selfish schemes that punish the many and benefit very few. I hope that, for once, common sense prevails.
Georgina Isaacs, London

“Too many cyclists already causing congestion on the roads.”
Grace Frankel, London

Who is paying vehicle excise duty to go on a road – drivers or cyclists ? If cyclists wish to use the same roads then they should pay duty as well.
Julian Jakobi, London

“… Cyclists should not be treated preferentially but fairly with other road users.This is not fair as cyclists do not pay vehicle excise tax and so car drivers pay to drive but are banned from driving on roads which cyclists who have paid nothing can ride on for free.That is inequitable.”
Julian Jakobi, London (again!)

I believe that cyclists, who have a right to safe and pleasurable cycling, will not benefit from a scheme that causes motorists to be frustrated and delayed. On the contrary: they could be at greater risk. Happy motorists mean safer cycling.
Roberta Perlman, London

“I think the congestion caused … will be detrimental to my children’s health.”
Tamara Craig, London

It is totally ridiculous … I will be unable to get any where … we will become prisoners in our own homes
Tracy Grabiner, London

why do cyclists seem to have a divine right what about the tax paying motorist which clever local councillor/politician thought this one up.
John Lawson, London

“My sons school is around there and it’s a lovely leafy part of London and should not be changed.”
Paula Morris, London

“The transformation of the Outer Circle into a ‘cycle superhighway’ is an appalling idea which will forever change the benign and bucolic atmosphere of Regents Park. In recent years, there has been a marked increase in the numbers of faux-Chris Hoys and faux-Bradley Wiggins using that stretch of roadway as a race track, some reaching speeds of 30mph and beyond, overtaking cars, while giving no leeway to pedestrians and dog walkers attempting to cross the road. Many shoot the traffic lights on red. There is absolutely no doubt that if the Outer Circle is designated as a cycle superhighway, it will be a magnet for aggressive, speeding cyclists and the pedestrian will be at far greater risk than from motorists, who generally appear to be law abiding and keeping within the speed limit. The ‘cycle superhighway’ will, as TFL knows, create huge traffic congestion in the heart of the West End of London — already virtually at a standstill — and is indicative of a politically-driven agenda by TFL, the Mayor of London and the London Assembly, to rid London of the car and force its citizens onto public transport and the bicycle.”
Miles Tim, London

“… The proposal will make it impossible for people to visit London Zoo with families as it is awkward to get to by public transport anyway. This will have an adverse effect on an excellent charity which supports endangered wildlife throughout the world … I urge you to reconsider the proposal which is an unreasonable preference for cycle users who make no contribution to road maintenance as they pay no road tax and do not purchase petrol.”
Tamara Rabin, London