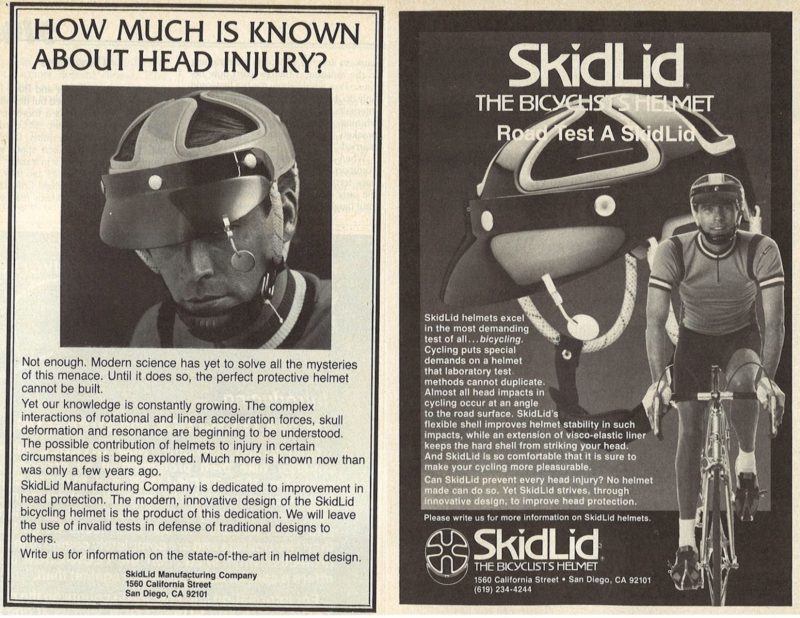 It is often assumed that the main cycle-helmet information source must have been started by a cabal of money-grubbing helmet manufacturers in cahoots with automobile interests aiming to make cycling look dangerous.[1] In fact, the Bicycle Helmet Safety Institute of America was born from a cycle-advocacy organization that, from its foundation in 1972, lobbied for separated cycleways. Today, those in favor of cycleways are often opposed to cycle helmets, citing that in countries where cycling is common helmets are not.[2]

The BHSI was founded in December 1988, but its roots go back to 1974 when the then two-year old Washington Area Bicyclist Association collected bicycle helmets from nine brands, and set out to test them.[3] Randy Swart, a former State Department economist, approached the Snell Memorial Foundation to arrange a comparative test, but the helmet-testing organization declined (at the time it tested only motorsports helmets).[4] WABA’s helmet committee approached Snell again in 1979, and the outcome was WABA’s Bicycle Helmet Wearability Study which tested and rated eleven helmets. “Without one, you are always in danger,” wrote Swart in the helmet committee’s first communication, “with one, you stand a good chance of surviving even a bad crash.”[5]

In June 1980, 22-year-old Washington bicycle messenger Mary Gaffney was killed by a truck.[6] While the BHSI website acknowledges that cycle helmets offer little protection in a crash with a truck, Swart echoed the DC Coroner’s belief that Gaffney’s death “might have been prevented by a safe helmet.”[7] The WABA’s board created the Mary Gaffney Memorial Fund “which would solicit donations to be used to promote helmet use.” The Fund paid for the helmets used in a 1981 helmet comparison carried out by Swart and WABA’s Tom Balderston, a cyclist and motorcyclist. Balderston convinced Snell that the quality of cycle helmets had advanced enough for them to warrant cycle-helmet-specific tests.

Helmet manufacturers were not keen on WABA’s helmet committee efforts. “Some of the manufacturers got worried when they heard what Swart and Balderston were doing, and tried to scare them off,” claims a WABA history.[8] Swart recalls: “Skid Lid sent us a page and a half of obscure references thinking they could bury us. But Tom went to the Library of Congress and looked up everything, while I called a professor in Sweden, and we found out they were just blowing smoke.”[9]

Balderston wrote up the results of the study for Bicycling magazine but, according to the WABA history, the “publication date for the article kept slipping, possibly because some of the manufacturers threatened to sue.” Swart informed Bicycling that WABA’s lawyers wanted to see the communications from the manufacturers. The study was eventually published in 1983, and thanks to a PR push by WABA the Bicycling article “generated a great deal of interest in the media,” said Swart. “It was reviewed in *USA Today* … and on several television and radio programs.”[10]

Snell urged WABA to join the helmets committee of the American National Standards Institute. According to Swart this had “already drafted a bicycle helmet standard, but it was bottled up by members who were manufacturers of helmets that did not meet the standard.” A bicycle helmet standard was adopted in 1984, and Swart started to travel the country telling “bicycle rallies about the importance of bicycle helmets …” He figured that if he “could convince the serious bicyclists who attended these rallies, others would follow their lead.” WABA also paid for the production and dissemination of brochures promoting helmet use.[11]

WABA’s helmet committee became the Bicycle Helmet Safety Institute in 1988. Swart is still the BHSI’s lead volunteer. The BHSI’s much-visited web site – helmets.org – went online in 1995, and despite its antediluvian design is still the main go-to source for cycle-helmet information or, as some opposing advocates would have it, cycle-helmet propaganda. The helmet issue is one that can divide cyclists almost like no other. Pro-helmet campaigners say the wearing of cycle helmets saves lives.[13] Opponents say the promotion of helmets makes cycling – which is statistically safe – look dangerous, and therefore less appealing, especially to would-be cyclists.

The BHSI is still part of the cycleways-lobbying Washington Area Bicyclist Association, although it is not supported by members’ subscriptions (BHSI is run on a shoestring budget funded by consumer donations). In a 2013 blog-posting WABA president Jim Titus appeared to diverge from some of BHSI’s positions.[14] In particular Titus wanted the federal government to withdraw its long-standing claim that bicycle helmets prevent 85 percent of head injuries.[15] This statistic – pointedly called “bad information” by Titus – is from a 1989 Seattle study, and is frequently wheeled out by pro-helmet campaigners.[16] Titus said:

Efforts to replicate … results during the 1990s confirmed that helmets reduce injuries, but not nearly as much as the Seattle study suggested. Yet public health advocates, government web sites, and the news media have continued to repeat the 85% factoid to the point that it has become a mantra. Bad information can cause problems … If people think that helmets stop almost all head injuries, consumers will not demand better helmets, and legislators may think it makes sense to require everyone to wear one.

In response to WABA’s petition the National Highway Traffic Safety Administration and the Centers for Disease Control dropped the eighty-five percent claim. Swart continues to claim that the 1989 study was a “landmark” one, and despite its many critics, he believes it and another from the same researchers with a lower estimate to be “still valid” and “based on field experience.”[17]

BIKE BOOM WILL BE PUBLISHED IN SPRING 2017 by ISLAND PRESS, WASHINGTON, D.C.

NOTES
 
[1] The main “anti-helmet” source is the Bicycle Helmet Research Foundation.
[2] The “helmet issue” is a charged one. Many pro-helmet cycle advocates – such as those in WABA – lobby for safer helmets, but argue against compulsion.
[3] The cycle helmet brands were American Safety, MSR, Bell, Cooper, Nestor, Johnson, Protec, Safetec, and Shoei.
[4] Swart went headfirst through a taxi’s front windscreen while cycling in Washington, D.C. He was wearing a helmet at the time, and this crash convinced him that even further than helmets were necessary when cycling.
[5] The WABA Helmet Update, WABA Helmet Committee, Vol. 1, No. 1 – May, 1983.
[6] http://www.ahalenia.com/memorial/mgaffney.html
[7] “While we would all like to believe that a helmet could save a cyclist run over squarely by the wheel of a car, truck or bus, that is not the case.”⁠
[8] WABA History (1972-1992)
[9] From WABA history plus email communication with the author, 28th September 2016.
[10] Bicycling, March 1983.
[11] WABA History (1972-1992)
[12] WABA History (1972-1992)
[13] Nobody advocates for wearing helmets while in bed, not even the sleep-walking woman who fell from a balcony. Instead of pushing for bed-helmets she advocates that people on bikes should wear helmets. “Brain injury mum’s plea over cyclists,” Glasgow Evening Times, 11th August 2014.
[14] http://www.waba.org/blog/2013/06/feds-withdraw-claim-that-bike-helmets-are-85-percent-effective/
[15] Jim Titus provided this statement by email:

“WABA and most cycling organizations in the United States support efforts to improve helmet quality and encourage the voluntary use of helmets, and they oppose laws that require adult cyclists to wear helmets. In 2013, an influential legislator introduced a bill to require cyclists in Maryland to wear helmets, relying in part on a longstanding claim by the federal government that helmets prevent 85 percent of potential head injuries.

“As part of WABA’s efforts to persuade Maryland legislators to not enact a mandatory helmet bill, WABA board member Jim Titus petitioned two federal agencies to stop claiming that helmets prevent 85% of head injuries, under the Information Quality Act, which allows citizens to challenge the publication of bad information by government agencies.”

A debunking of this study and others can be found on cyclehelmets.org.
[17] http://www.helmets.org/negativs.htm and email communication with the author, 28th September 2016.

In 1985, the Department of Transport (when it was still “of” and not “for”, and long after it had been the Ministry of Transport) erected a poster in London with a real elongated bicycle, telling passing motorists that “You can never give a bike too much room.”

But as is clear from this piece on BBC1’s John Craven’s Newsround, the rest of the campaign was filled with standard fare, much of it victim blaming: “If you’re going to use the road, use your eyes” and “Dead. Obvious.”

Try and ignore the fact reporter Roger Finn said 100 cyclists were killed each day (he should have said about 100+ were killed each year) and listen to what Tim [Feeby?] of London Cycling Campaign said:

“We need cycle lanes on main roads, crossing of the major roads, and [the Department of Transport] has to stop building massive motorways in urban areas which will make conditions worse for everybody, not just cyclists.”