Most histories say it was Peugeot of France or Kestrel of America which made the first carbon bike, sometime in the 1980s. In fact, the first carbon-framed bicycle was made in Britain, and in 1971.

Many of today’s top bicycle makers – including companies such as Trek, Specialized, Giant and Cannondale – were founded in the early 1970s, thanks to the bicycling boom that started in 1970, and which is the subject of my proposed book, currently on Kickstarter. All make carbon-framed bicycles, all owe a debt of gratitude to Carlton. No, not me, the bicycle brand operated through the Specialist Bicycle Development Unit of Raleigh bicycles. The SBD may have been owned by Raleigh but it was operated independently by Gerald O’Donovan, a bike designer and engineer who was head of Carlton Cycles, a bespoke lightweight bike manufacturer. Raleigh had absorbed Carlton Cycles in 1960 at the behest of 1950s track star Reg Harris.

In 1970, ten years before Formula 1 would do likewise, O’Donovan started experimenting with carbon fibre. The new wonder material had been first demonstrated in 1958 by Union Carbide researcher Roger Bacon of the US but it took until 1963 before a production process was patented. This was granted to the UK’s Ministry of Defence via the National Research Development Corporation, a Government body established after the Second World War by the British Government to transfer technology from the public sector to the private. Scientists at the Royal Aircraft Establishment at Farnborough, Hampshire, perfected the production process of polyacrylonitrile, a material first described by Japan’s Agency of Industrial Science and Technology. The NRDC licensed the production process to three British companies, including Rolls-Royce. Rolls-Royce used the material in jet engine compressor blades but these proved vulnerable to damage from bird strikes, and development of the wonder material stalled.

The NRDC then sought other uses for carbon fibre and offered to help O’Donovan research the material for use on bicycles. He commissioned some tubes made from carbon composites and used aluminium lugs to bond them together. This carbon composite bicycle was displayed as a prototype machine on the Carlton Cycles booth at the Cycle and Motorcycle show in Harrogate in 1971. O’Donovan also commissioned carbon cranks and these were used by track riders, but production problems meant they disintegrated under the strains of track use. 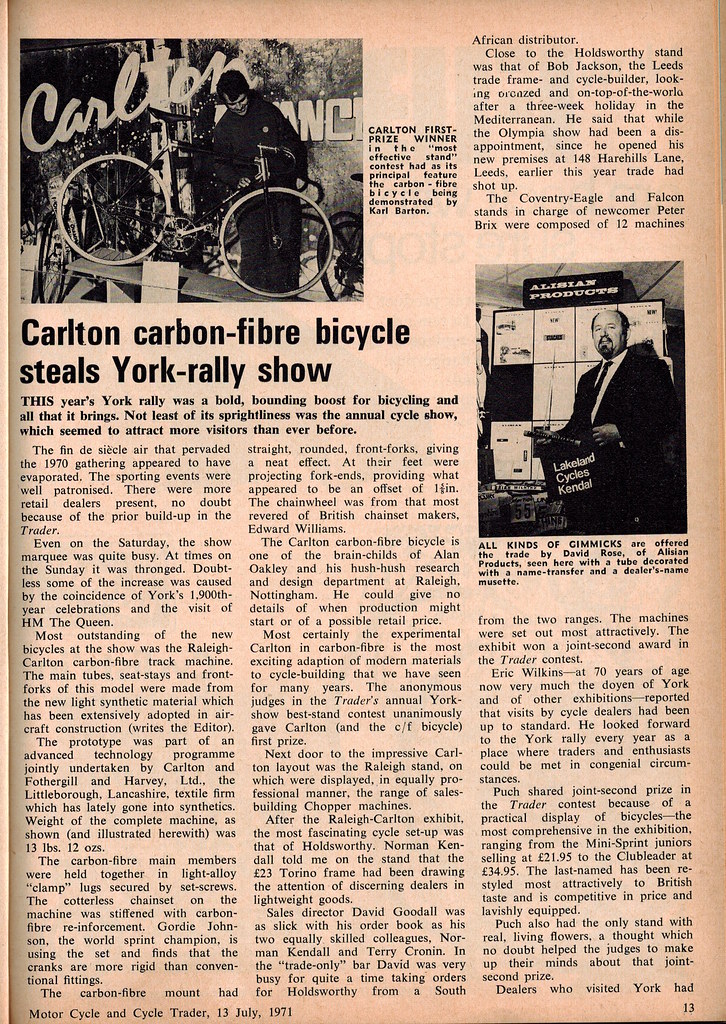 Dave Walsh of Universal Cycle Centre, a Rotherham bike shop, used to work at Raleigh’s Specialist Bicycle Development Unit. He said: “O’Donovan was a genius. He was well ahead of his time.”

O’Donovan’s experiments with carbon composites showed promising results. A report produced by the National Research Development Corporation said the Carlton bicycle was “so light it could easily be picked up with one finger,” adding that “carbon fibre reinforced plastic is twice as stiff as steel, yet weighs only one quarter as much.” This, the first ever carbon framed bicycle, was said to have had undergone extensive tests and was “soon to go into production.” However, this was not the case and the next leap forward for carbon came not from the UK but from the US.

Frank Appel, Richard Katner, Bill﻿ McCready and Jeffrey Lindskoog of the F.H. Appel Company designed a carbon fibre bicycle frame in 1975. This was produced for Graphite USA, a manufacturer of fishing rods. At roughly the same time, oil company Exxon, then a sponsor of a US road bike team, paid for the development of a carbon fibre frame bike from Graftek, a manufacturer of fishing rods and golf clubs. The Graftek G-1 had a aluminium frame wrapped in carbon fibre. The bike was used by the 1976 US Olympic team and was later sold to the public.

Jack Schmidt, who worked at Graftek in the 1970s, recalled:

“The Graftek carbon fibre tubes were an aluminium-carbon fibre hybrid. The epoxy impregnated pre-preg was cut and rolled onto the tubes in the proper fibre orientation. This Al-CF sandwich was wrapped with Tedlar tape under tension to compress the composite, then the tubes were put into an oven for curing. Both the ends of the corresponding tubes, the lugs and dropouts were coated with epoxy, then assembled in a holding fixture.”

European companies started working with composites in the early 1980s. French tube manufacturer Vitus produced carbon-wrapped alu tubes that were used on lugged bicycles by Peugeot. These bikes were used in the 1982 Tour de France. In 1986, Look built a lugged carbon frame which Greg Lemond rode to victory in Le Tour.

Also in 1986, Kestrel USA, a company founded by ex-employees from Graphite USA, produced the Kestrel 4000, a bike based on an all-carbon composite bike frame with smooth, aero lines. It’s this bike which most resembles those produced today, but it wasn’t the first.